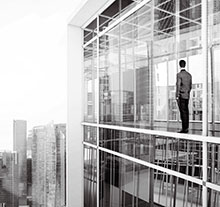 In the world of the firm, something is changing. It’s not that your local bookstore went out of business. Or that your taxi driver now rates you on a 5-point scale. Or that anything can now be outsourced, allowing even the smallest firms to rent capabilities on demand. It’s more profound than these.

The prevailing paradigm that has underpinned business for the past 50 years is under review. The simplest version of that paradigm is that firms exist first and foremost to deliver returns to their shareholders’ capital—and the sooner they deliver it, the better. We will describe the challenges confronting this paradigm. But the first question we asked as we observed the changes was this: Is such a shift unusual? Has the idea of the firm been consistent over time, or has it changed before?

What we learned from looking back was that, similar to other human endeavors, the idea of a business has evolved slowly but profoundly through a series of what we can now see as definable eras: periods when particular strategies, corporate forms and styles of management became the dominant norm. We have observed five distinct eras since the industrial revolution. These eras include the current period, which we call the “shareholder primacy” era.

Transitions between eras play out over decades. The edges are fuzzy and often become clear only in hindsight. Some elements of the previous era remain in place, while others evolve into something quite different. The shareholder primacy era, for example, retained and enhanced several features of the previous period, including the importance of professional managers and the pursuit of scale to achieve leadership economics. But companies in the current period refocused on their core businesses, shed noncore assets, outsourced more and more functions, and made their remaining assets sweat harder. That focus, combined with a high rate of mergers and acquisitions, fostered increasing concentration within industries. CEOs and management teams, often holding significant equity stakes designed to align their interests with those of other shareholders, dedicated overwhelming attention to delivering shareholder returns. The ones who succeeded earned substantial rewards.

This website uses cookies to improve your experience while you navigate through the website. Out of these cookies, the cookies that are categorized as necessary are stored on your browser as they are essential for the working of basic functionalities of the website. We also use third-party cookies that help us analyze and understand how you use this website. These cookies will be stored in your browser only with your consent. You also have the option to opt-out of these cookies. But opting out of some of these cookies may have an effect on your browsing experience.
Necessary Always Enabled
Necessary cookies are absolutely essential for the website to function properly. This category only includes cookies that ensures basic functionalities and security features of the website. These cookies do not store any personal information.
Non-necessary
Any cookies that may not be particularly necessary for the website to function and is used specifically to collect user personal data via analytics, ads, other embedded contents are termed as non-necessary cookies. It is mandatory to procure user consent prior to running these cookies on your website.
SAVE & ACCEPT